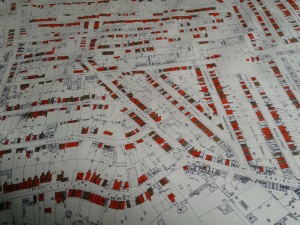 This 1969 map shows the three streets demolished in the 1970s, where Ruskin Park is today.

If you have memories, photographs or documents of Walkley we would love to hear from you.

If you would like to take part in oral and local history research please get in touch too.

There are lots of opportunities to be involved, and we can offer help and guidance.

The website has grown out of the Walkley Ways, Walkley Wars community history project. Between 2012 and 2015, the project participants investigated the 20th century history of Walkley, a suburb in the west of Sheffield through three themes:

1) Fir Street in 1908, the year the Walkley Liberal Reform Club was founded. The building became the Walkley Community Centre in 1974.

2) World War 1. To celebrate the centenary of the start of the First World War, we will research the lives and military careers of the Reform Club members who fought in the war.

3) Walkley life in the 1960s and 1970s, and the council plans to first demolish the suburb as slum clearance then the improvements scheme which protected what remained.

This entry was posted on November 9, 2012 by Bill Bevan in Uncategorized.